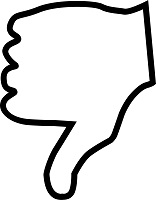 I’m going to let you in on a little secret about myself today. It’s nothing huge, simply an unpopular opinion I have that I usually keep quiet about. But what the hell, I can let my thousands of readers in on it, right? Okay, hundreds. Tens? Uh . . . readers. I can let my readers in on it. Reader.

For the love markets. Those websites and ezines—or even print anthologies destined for Amazon—where there’s no pay involved for the authors. Where we’re asked to just give our hard work away, for free, for the love of the genre, or writing itself, or exposure, or somesuch bullshit. I hear all the time about how evil they are, both online and when I attend (and sometimes sit on) event panels about writing. I was on a couple of panels last month (October is the horror writer’s busy time), and it was said at both of them: writers deserve to get paid; FTL projects weaken the market; don’t fall for the line we’ll pay you in exposure because (pro tip: ) people die of exposure; you should never, ever give anything for an FTL publisher, because it means even you don’t think enough of your own work to insist you get paid.

I’ve heard all that. Hell, I’ve said all that. But here’s my shameful, dark little secret: I don’t really think FTL markets are all that bad.

I’ll break the litany down for you.

Do I believe writers deserve to get paid?

You bet your ass we do. I know we do. Unless you’ve done it, you have no idea what kind of work goes into even the shortest piece of good writing—hell sometimes making it the shortest takes the most work!

Do FTL markets weaken the writing market as a whole?

I don’t know. I know I’ve seen essays insisting they do, and I’ve found some fairly persuasive arguments in there, but for myself, I’m just not sure. Perhaps I’ll come to a decision about this someday—I’m growing in this business all the time—but for now I’m content to read all the essays that come my way without comment: I just don’t know enough yet.

Do people die of exposure?

Of course they do, but not the kind of exposure certain publishers are talking about. What they mean is they’ll help you get your name out there, put your work in front of a bunch of eyes, and isn’t that something every writer wants? If people just see what I’m doing, the new writer thinks, they’ll love it, and look for more of it. They’ll clamor for it, I know they will!

No, they won’t, little lads and lassies. Not the way you’re thinking. FTL markets vary about as much as smaller paying publishers do, but chances are still good that if they’re not paying you, they’re not going to pump all that saved cash into professional editing or a decent cover. Those things cost money, boys and girls, often (and sadly) more than what the authors would be getting paid anyway. Without those two things, your FTL market isn’t going to have a distribution higher than the number of friends I have on Facebook, and hell, I can reach all those people myself.

I’m on the fence about this one, though, as I have had a certain amount of success getting my name out there with work I’ve given away. I write a monthly movie review column for fun and exposure. Has it been fun? Big yes on that one; looking for films to review has gotten me to see some gems I may have otherwise missed. The exposure part . . . well, that’s harder to gauge. I can say that after writing reviews of the films I did pick up Twitter followers from the cast and producers of the movies Wolfcop and Wyrmwood: Armageddon Road, and I have been approached by a production company or two about reviewing their films. I suppose it depends on where you’re putting your FTL work, and I may have simply been lucky.

Does giving something to an FTL publisher mean even you don’t think enough of your own work to insist you get paid?

Possibly. But at the beginning of our writing careers, some of us actually feel that way. And you know what? We’re probably right. We’re just happy to have anything we can point to and say That, that right there; someone else, someone I don’t even know, likes that thing I wrote enough to come out and publicly say “I want it.”

I know of writers who are bastions of self-confidence, who assume that if they wrote it, it must be good. But not every writer is like that. Some writers, myself included, walk on the scene with almost enough self-confidence to fill a peanut shell. Without taking the nut out first. I’ve been doing this since the end of 2010, and I still lack self-confidence; pushing the SEND button on a submission fills my stomach with Mothra-sized butterflies because I’m sure I could have done something better, or written a more powerful story, or something.

The first story I ever had accepted was to an FTL market. I knew what it was, and didn’t care: I wanted to see my name somewhere. Anywhere. The acceptance email, for all it’s bland, form-letterness, still gave me that weepy They like me, they really like me feeling. The queue of accepted work was so long for that ezine, the wait between acceptance and publication so prodigious, my second accepted story was actually published first—in a paying market.

For a while there I was submitting anywhere, pay, non-pay, I didn’t care, just so long as I didn’t lose my nerve and stop submitting. I got acceptances—some for pay, but more for non—and my confidence grew. As it did, my target audience for submissions changed, and I was looking to get into more and more paying markets. It’s more challenging to get into a paying market; there’s more competition, and it’s just all-around cooler if someone says they like your stuff enough to pay you for it. And, like I said above, it’s a lot of work putting out good fiction; just because my work has been getting better, doesn’t mean it’s been getting any easier. Actually, doing all the things I didn’t know to do when I started means it’s actually more work than back then.

That was all in the beginning. Now, every market I submit to is—with a couple of notable exceptions—a paid market. Every small accolade I’ve received has been for something that was, in some way, making me a little money, as is everything you’ll see me mention in a bio or query letter. I’ve come a long way as a writer from those first submissions, and though I still have all the self-confidence of Dumbo without his feather and an anchor strapped to his ass, I’ve been doing this long enough and gotten enough feedback to suck it up and say that yeah, I’m a pretty damn good writer, and if you want my best work you’re going to have to pay me.

When I hear the arguments against FTL markets though, for all that they make sense to me, I can’t help but remember that terrified younger me, convinced what I was writing was shit but writing it anyway, and just hoping for a little encouragement. I remember that guy and I remember a couple of well-timed acceptance letters, and I thank God those for the love publishers were right there, right then. If you’re an established writer who never needed a crutch, or a new writer who doesn’t want one, then good for you. I’m honestly happy for you, and wish you tight writing and rocking stories for the rest of your days. If, however, you’re more tentative—even terrified—then FTL markets might be just the confidence builder you need. You can always outgrow them if you want, and leave them behind.

After all, you, like me, are nothing more than a writer in progress.