I'll Tell You What I Want, What I Really, Really Want. 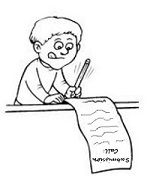 I was wondering aloud what to write for this month’s blog post, and someone pointed out that I’d recently finished reading for an anthology I’m editing, and I could write about all the fun I had doing that. And she was right, it was fun, and I read a lot of really good stories. But that’s the thing: there were a lot of stories.

Now, I’m not complaining about the actual number of stories—in fact, I’m thrilled with the sheer quantity of submissions we received, both because it spoke to a lot of interest in our project and because it gave me plenty of material to work with in creating the best book I could. That was the goal, of course, to put together the best book possible. That meant I had to read through the entire pile of stories searching out the ones I thought best fit our theme. Knowing I was going to have to do that, and to help funnel stories I might be able to use in my direction, before we actually began soliciting work we created and posted a submission call.

A submission call, for readers who may not know, is a statement of want. It’s a written indication of what an editor or publisher is looking for to help give writers the best shot at getting their work seriously considered for publication. Sounds pretty simple, right? It’s something we’ve all been doing since we were children: we tell people “I want this.”

So, since I was putting together a humorous horror anthology, I didn’t just say Send me your stories. I said Send me your funny frighteners. Make me shiver and giggle. I said, and I quote: “What we’re looking for: Original stories that are both entertaining and fall firmly in the horror genre. Think Jeff Strand, Joe Lansdale, Shaun of the Dead, Zombieland. Make us die laughing.”

While going through everything that came my way, however, I read romance stories. I read fantasy tales. I read some straight horror and I read some funny stuff with not a whiff of the scary. And some of those stories were good, I mean really good, to the point that I was sad I couldn’t accept them. But I couldn’t. Because they didn’t fit the theme—you know, that I outlined in my submission call.

Now if you’re a fledgling writer, someone new to the writing for money game, you might not know about submission calls. You may have heard of them but never dealt with them. If that describes you, then ignore this next bit. It doesn’t apply to you. We all had to start somewhere, we’ve all been where you are, and we’re not going to fault you for not knowing stuff you don’t even know you need to know. You can, of course, read along and learn from others’ mistakes.

If, however, you’re not new to the writing game, and you’ve been doing this for a while, and you know what a submission call is, and you knowingly submit something—no matter how well written or loving polished—that is obviously outside the parameters set forth by the editor/publisher, well . . . you’re kind of an idiot.

Seriously. If I’ve told you what I want, what I need, why the hell would you waste your time and mine submitting something you know I don’t want? I’ll give you an example I’ve used in the past. We’ve all gone out to eat, right? Been in a restaurant? I don’t care what restaurant— from the biggest, most expensive steakhouse (sushi bar, vegan establishment, whatever) down to the shittiest, dingiest roadside diner, they all work for this example.

You check the menu, tell your server what you want . . . and they bring you something completely different. You ordered the steak, they bring you the chicken. You asked for the vegan special, they slap a big juicy burger down in front of you. You clearly said “The meat lover’s pizza, please,” and they bring you a caesar salad.

Are you satisfied? Are you happy? Or do you look at the server and say, “This isn’t what I ordered”? They’re not short staffed, they’re not in a big rush, they had plenty of time to look at the pad they wrote the order on, and you’re paying for this meal.

You send it back. Of course you send it back. And maybe they’re just having a bad day, but you’re going to think just a little less of them than the server who gets it right for you every time—and the next time you go there, you’ll likely remember your disappointment and hope to avoid that server if you can.

The editor/publisher is the customer in that example, and you, the writer, you’re the server. You’re also the cook, the one in the background putting your heart into the product you’re handing out. Wouldn’t you do everything you could not to be that server, delivering that lovingly prepared food to the wrong people?

I seem to go on about this again and again, but whether you’re an inexperienced writer who still has that new car smell or a seasoned scribbler with leather skin and ink for blood, submission calls are important. They’re a direct communication from the one you’re trying to sell a story to, where they’re telling you how to do it. Some of those stories were too long, some to short, some, as I said above, were even the wrong genre and seemed like the writer hadn’t read the submission call at all, but I’m serious when I say some of those stories were terrific. I would have loved to have read them in some other context, but here, in this context, all I could do was wonder why these people were shooting themselves in the foot.

There’s another category I want to talk about before I go, another level to this scenario (new writers, pay attention!): if your story’s been rejected for being outside the parameters of the submission call, for any reason (it’s too long, too short, wrong genre, didn’t include the one specific thing the call was asking for, whatever), don’t argue. Don’t tell the editor (the customer) your eighteenth century period piece would work well to offset the other stories in their Sci-fi book. Conversely, don’t voice the opinion that your romance set on the planet Kerfuffle in the year 3,071 would add spice to their old west mystery anthology. And your five hundred word story might just be fast moving and full of action, but arguing that it would inject some life into their tired, slow-moving book filled with stories from 4,000–8,000 words doesn’t make you a good salesperson.

It makes you, in their minds at least, an asshole.

Just to check, let’s go back to the above restaurant example and see what we think of our fictitious server when he offers us similar responses when we say we’d really prefer to eat what we ordered.

“Oh, forget the steak—I know you’ll like the chicken better.”

“I know you ordered the vegan meal, but, seriously, you need to get some protein into you. You’re looking a little peaky.”

“What? The pizza? Look, honey, do you really think someone with your hips should mow down on a meat-lover’s?”

Asshole. Asshole. Asshole. And the worst part is that while looking a little like an idiot could be someone merely having a bad day, or not knowing any better, being an asshole actually takes a little effort—and it definitely gets you remembered.

So, writers out there both new and old: submission calls are important tools and following them works in your favor; people do have bad days, and every once in a while we all look like idiots, but we should try to avoid it; and, for God’s sake, try not to be an asshole.

Now, I have to go write a story for a submission call I’m following, for a publisher looking for pizza-based horror. Yes, there are some weird submission calls out there. And though I already have a few unpublished horror stories I could send them, even some of the proper size, none of them fit that submission call exactly; they’re all missing one key element. So I’m writing a new story.

Talk to you later.

While preparing to post this to Writer in Progress, I’ve noticed I sound a little bitchy. I’m leaving the bitchy (it was how I felt when I wrote it), but wish to make one distinction: asking the editor/publisher why a particular piece didn’t work for them is not the same as telling them they’re wrong or trying to change their minds about what they want. Asking why a piece didn’t work is simply you as a writer looking for feedback, something we all crave in our efforts to do this better. Some editors will provide feedback, some won’t (sometimes there’s just no time), but no one will fault you for looking for it.

Asking for a little feedback: a writer looking to improve, which is a good thing.